i really liked kolkata. after relaxing on the andamans i was again prepared for mainland craziness and after two months of traveling through india i learned a thing or two. the crowd is part of the way of life in india and you have to stand up to protect your privacy and personal space. sometimes i was just too tired to make an effort. in kolkata i found it easier to handle most of the people wanting my best…

with good advice from people on the streets i found the way out of kolkata quite easily and was soon cycling through west bengal. i enjoyed my first break on one of the many lakes along the way and took the chance to wash away the kolkata dust which coloured my arms and face like a coalmine worker. the further i got towards varanasi the more difficulties i had with the growing heat. animals crowding at the few small water spots in the otherwise dry riverbeds. 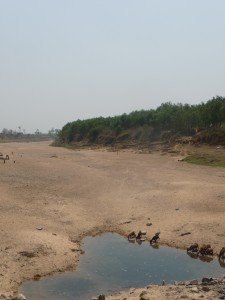 since i was taking smaller roads sometimes there wasn’t much of a road at all but no trucks or busses either. which was nice! i cycled for 3 days from kolkata. but on the last day after consuming 11 liters of liquids and still waking up thirsty in the night i decided to take the train.

to the lack of liquid in my body came a lack of orientation. maybe one thing led to the other. i got a little lost after taking a wrong turn but was found by wonderful people in kashipur, a small village far off. after a little concert and disputing about marx and weber, a group of 15 people escorted me back to something like the main road and gave me the address of their former school in adra, the sacred hearts church, where i could spent the night.

i was invited to stay the night and had a wonderful dinner with the father and headmaster of the school. the next morning i tried to get the train thing sorted out which proofed to be difficult. contradictory information and a brawl at the ticket counter wasn’t helping. but once again i got help from wonderful people, brothers from punjab this time, who first invited me to their house and later got me on the train in no time. it was the sort of people you want to have always around. if you need anything they know somebody and a phonecall later your problem is solved. motorbike escort to the train, a cold drink while waiting, no hassle getting the bicycle on the train, money is something somebody else can worry about, goodbye, visit again! thank you!

i had to change trains once and because of a minor misunderstanding had to spend the night at the station. there would have been a train in the evening but i was told different. the next train in the morning was cancelled and my ticket was not valid anymore. so i had to buy a new ticket and wait for the train in the afternoon. it was totally overcrowded and i squeezed myself in where it was possible, which means somewhere between the coaches on the floor of the gangway. i was kind of suprised as the conductor wanted me to pay three times the price of my ticket extra because i was technically speaking traveling the sleeper class. kiss my ass! i started to move and simply moved back 5 minutes later and wasn’t bothered anymore.

the train didn’t stop in varanasi itself because its four hour delay and maybe they wanted to save time this way?! so i had to take a rickshaw for the last 20 km. it proofed difficult to find a guesthouse in the middle of the night but my driver showed no mercy with the sleeping staff and after 20 bells and 19 times “no, we’re full” he found me a guesthouse. i fell into bed immediately.

one night of sleep just wasn’t enough for me to recover from the last exhausting days and i got a little ill. so the only sport for the next day was dragging myself to breakfast. another good one from the india menu of spelling (t)errors. “may i have a chicken sand witch, please?” back to bed!